Social scientists are always on the lookout for “natural experiments” — situations where policy differences unintentionally create distinct populations that can be compared to test theories and scientific questions. For example, a researcher studying the effects of minimum wage increases can compare two demographically similar cities or states, where one raised wages and the other did not. While less precise than a controlled experiment, these comparisons can provide large amounts of data for testing different hypotheses, while minimizing the ethical concerns of only offering benefits to half of a subject pool.

Data science and new policies for the use of proprietary data in research have unlocked new opportunities for finding and utilizing these natural experiments. In his May 8th talk for the inaugural Center for Data and Computing Speaker Series, Peter Ganong of the University of Chicago Harris School of Public Policy discussed one such example, using financial data from JPMorganChase Bank. With his co-author Pascal Noel, Ganong used data from hundreds of thousands of bank accounts to study how unemployment benefits affect spending, with implications for both economic theory and how unemployment benefits are structured. 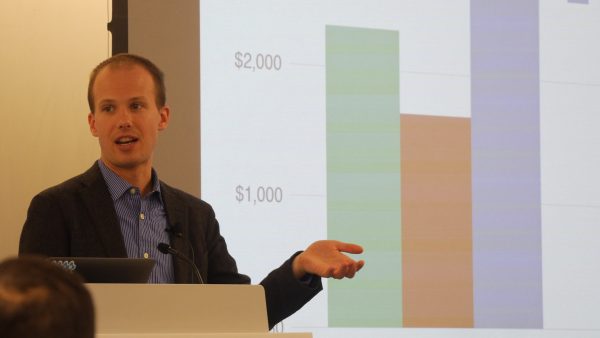 In the talk below, Ganong walks through the process of obtaining the data, converting it to best answer their research question, the results of their analysis, and how their conclusions could be used to better design unemployment policy. The study looked at 20 different states, where policies can vary by the amount paid through unemployment insurance and the duration of those benefits. The researchers could then look not only at the overall effect of unemployment policy on spending by households after job loss, but compare states with different benefit structures.

The primary result — that household spending drops both when unemployment begins and when benefits end — may sound logical to many, but settles one aspect of an economic dispute between rational and behavioral models. Zooming in to look at states with more generous or longer benefits allowed Ganong and Noel to conclude that the gains from making benefits longer than current length was larger than raising the level of UI benefits.

“This is evidence of just how strongly month-by-month spending is responding to income coming out of unemployment benefits,” Ganong said.

As part of the first cohort of CDAC Data Science Discovery projects, Ganong and Noel will continue to explore this data and phenomena, focusing on how financial resilience interacts with racial inequality. Using the same Chase dataset, the researchers will measure income and spending on a day-to-day basis to examine how households cope with economic shocks, measuring financial resilience by whether household members cut back on grocery spending, skip doctors appointments, or miss bill payments. For a topic at the sensitive intersection of welfare policy, race, and economics, data science enables new, powerful natural experiments for important research questions that would be otherwise impractical or impossible.