The Internet of Things is often understood at the level of a single device: smart locks and thermostats, activity trackers and other wearables, and sensors that collect data on vehicles and buildings. But the deepest impact of IoT will likely be found at a much larger scale, as connected devices coalesce to make “smart cities” possible. Deployed correctly, the combination of streaming data, deep analytics, and automation holds great promise for making communities safer, cleaner, and more cost- and energy-efficient.

That potential inspired a June workshop co-organized by the University of Chicago and the U.S. Army Combat Capabilities Development Command’s Army Research Laboratory, focused on what IoT technologies can do for tomorrow’s cities and military installations. By convening armed services scientists and staff with researchers from UChicago CS, Argonne National Laboratory, and other universities, the two-day event focused on opportunities for new collaborations that can help bring those smart city applications closer to reality.

Smarter Bases to Improve Quality of Life and Security

The U.S. Army’s interest in smart cities comes from their considerable portfolio of installations around the world — 156 sites and over 1 billion square feet of buildings in total, including bases, airfields, training facilities, arsenals, and even cemeteries. John Thompson, the leader of the “Installations of the Future” portfolio for the Deputy Assistant Secretary of the Army (Strategic Integration), said that each of these installations can be thought of as a “mini-city,” sharing many of the same energy, infrastructure, and security responsibilities and challenges as civilian communities.

Army officials hope to use IoT technologies such as sensors and automation to improve the management of these sites. Thompson’s examples included automatically controlling the temperature of empty barracks while Soldiers are out in the field training, or using embedded sensors and analytics to predict maintenance issues before they occur. More generally, the Army realizes it will need to update these communities to make them appealing and safe for its personnel stationed there. Thompson said.

ARL’s open campus model is changing how the Army is doing research, emphasizing public-private partnerships that incorporate university, national lab and industry technical expertise. The objective of this event was to develop strong partnerships through identifying the challenges faced on Army and DOD installations, assessing the current state of the art in harnessing sensor technology within smart cities, and prioritizing the science and technologies that can greatly impact Army installations and Army operational needs. Dr. Mark Tschopp, regional lead of ARL Central was instrumental in bring individuals from universities and industry within the Chicago area to support this workshop.

“I’m thrilled to see the excitement from pulling together experts and decision-makers from across academia, the Army and the DOD to discuss the future of smart cities and smart installations,” Tschopp said. “While there may be some disagreement about the term “smart,” there is no denying that ubiquitous IoT and sensor technologies are leading to an overwhelming amount of data that can be harnessed to our advantage.

“So, the real question is… how do we enable a future capability with these technologies where we make Soldier’s lives better and safer, where we provide installation commanders with information to make decisions, where we increase the level of protection within our installations, and more broadly, where we make people’s lives better by integrating with the surrounding communities—all with the proper amount of security and privacy. Together, we can tackle existing gaps that stand in the way of that future and can produce outcomes of impact for the Army.” 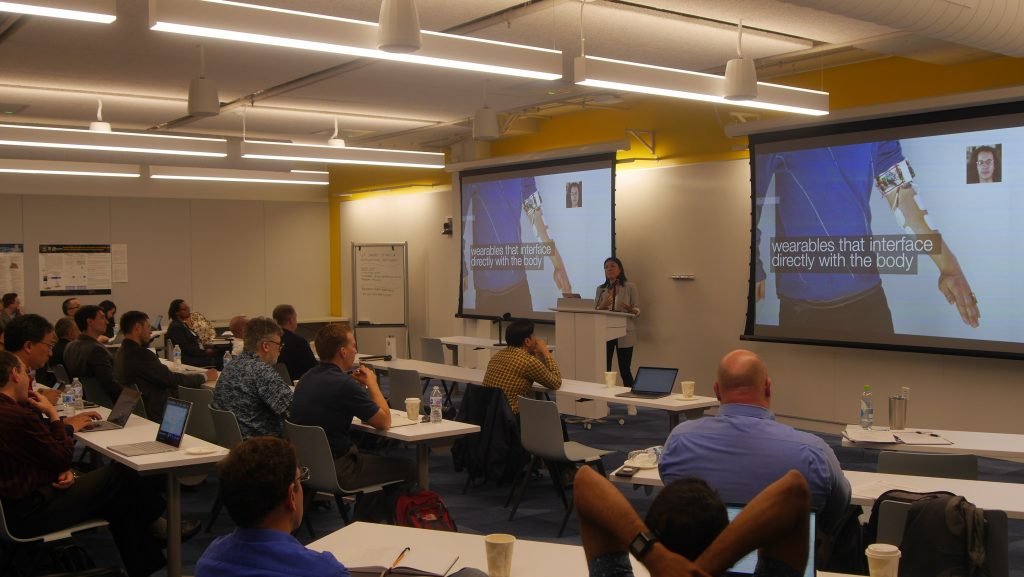 The Computer Science Enabling a Safer, Faster Internet of Things

Some of the IoT technologies and approaches needed to realize that vision were presented by academic researchers from universities and national laboratories. The IoT Security and Privacy Group, introduced by Neubauer Professor Heather Zheng, connects the laboratories of seven UChicago CS researchers interested in protecting these technologies from malicious use — and protecting the rights of the people around them.

While much of this research currently focuses on IoT at the level of the “smart home,” Zheng said that many of the insights could be scaled up to smart cities and communities. Group projects include a bracelet to keep conversations private by jamming nearby microphones used in smart assistants like Amazon Echo or Google Home, an IoT traffic inspector that captures, analyzes and visualizes IoT traffic to detect hidden security and privacy violations, verifiable programming to make the use of smart home devices easier for non-technical users, and protections against the exploitation of wifi signals and deep learning models for security breaches.

“We are trying to identify new types of privacy attack and determine how we can protect our home from these silent invasions,” Zheng said. “We also want to help users understand what devices are around them, what data these devices are collecting, and how they can opt out.”

Elsewhere in the workshop, Charlie Catlett, senior computer scientist at Argonne and a senior fellow of the Mansueto Institute for Urban Innovation at UChicago, showcased the Array of Things project, or AoT, which invented and installed hundreds of sensor nodes in Chicago to gather data on the city’s environment, infrastructure, and activity. Data created by the sensor network is now available for scientists to study urban health, city officials looking to improve traffic safety, and communities to monitor their local air quality.

A Roadmap for the Smart Future

The workshop concluded with breakout sessions discussing the most fruitful paths for future collaboration among the participating institutions. The discussants proposed questions around scalability, including how to create installed IoT devices that can adapt and evolve over time, and security/privacy — how to “insulate” different IoT systems so they function as desired despite potential interactions, overlaps and even conflicts.

In addition to Catlett, Zheng and Tschopp, workshop organizers included Dr. Adrienne Raglin from ARL, Julia Lane from the Center for Data and Computing and Dr. Tarek Abdelzaher of the University of Illinois at Urbana–Champaign.

“The Army’s Modernization Priorities and Cross-Functional Teams are equipping Soldiers with the best technologies for secure communications and networks for operational needs in a multi-domain environment,” said Raglin, Team Lead, Electronics Engineer, Battlefield Information Processing Branch at ARL. “From an infrastructure perspective, many of the same science and technologies challenges that exist in a tactical operations center are the same as those needed at forward operating bases and the same as those in domestic installations.

“One of many intriguing questions that came up in the context of multi-domain operations is, “where does the operational environment start and end?” There was a lot of discussion about how the domains of space and cyber suggest that the Army’s operational environment extends to Army installations, the surrounding communities, and cities. So, the goal of this workshop was not only about how to best leverage existing and future smart sensing and network technologies in maintaining Army installations, but also about how we increase stand-off from adversarial attacks and protect installations, where ever they may be.”