The Center for Effective Government (CEG) at the University of Chicago’s Harris School of Public Policy announced its second cohort of Senior Practitioner Fellows, who join the Center for its yearlong fellowship. The four incoming Fellows will leverage their years of experience and expertise in public service, advocacy, policymaking, and civic engagement to grapple with issues of government and democracy reform at a critical moment: an election year marked by deep divisions in our politics, government mired in dysfunction, and myriad threats to democracy.

The 2022 CEG Senior Practitioner Fellows are:

Epps-Johnson and Finn will take part in the Center’s forthcoming Data and Democracy initiative — a collaborative effort with the University of Chicago’s Data Science Institute that will delve into issues of democracy in the digital age through cross-disciplinary research and robust external engagement.

“Skilled practitioners should inform the questions we ask about problems of ineffective governance and faltering democratic institutions—and the solutions we seek to them,” said Sadia Sindhu, executive director of the Center for Effective Government. “The track records of these Senior Fellows prove they are equipped to grapple with these problems both thoughtfully and urgently. We are excited for the opportunity to leverage their expertise and uplift their work at the Center this year.” 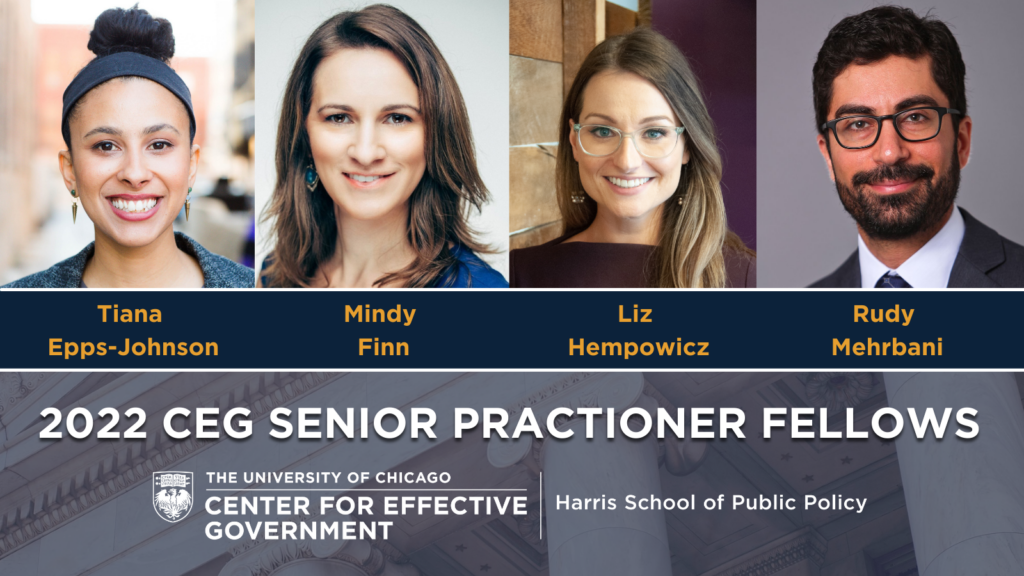 The Senior Practitioner Fellowship, launched in 2021, brings together a diverse set of leaders for in-depth analyses and stewardship of institutional reforms alongside members of the CEG and University community. During their yearlong affiliation with CEG, Fellows take part in robust programming including direct student interaction, convenings of key players in the reform space, and public engagement. Their efforts throughout the year are organized around a unifying theme that draws on each Fellow’s expertise and interests, and Fellows receive modest remuneration for their work with the Center.

Tiana Epps-Johnson, a civic technologist and advocate, said, “As we approach another critical election, the health of our democracy depends on effective, 21st-century civic engagement. I am thrilled for the opportunity to work alongside the Center for Effective Government as a Senior Practitioner Fellow to find innovative, data-driven practices that inform and empower the public.” Epps-Johnson will consider investments in election infrastructure, administration, and security; facilitating information-sharing; and implementing best engagement practices across different sectors and government agencies.

“I’m honored and excited to be named a Senior Practitioner Fellow with the Center for Effective Government,” said civic entrepreneur and former political operative Mindy Finn. “I look forward to working with the UChicago family and my peer Fellows towards the vital shared mission of strengthening our democratic institutions.” Finn, who was an independent candidate for the vice presidency in 2016 alongside former intelligence officer Evan McMullin, will explore potential reforms to electoral systems and the ways in which political and digital communications strategies can bridge divides while combating misinformation and political polarization.

Incoming Fellow Liz Hempowicz, an expert on issues of government transparency and oversight, said, “With distrust in government at an all-time high, the ability of policy makers to rebuild faith in our government institutions will require strong mechanisms for oversight and accountability. I am eager to engage with my colleagues at the Center as we dive even more deeply into how to advance progress in these critical topics this year.” During her time at CEG, Hempowicz will lead programming on effective internal checks on executive power, from inspectors general to whistleblower protections to policy dissent channels; and the flow of information to Congress and the public to enable effective policy-making, oversight, and accountability.

“I am honored to join this impressive cohort and look forward to working with the Center to advance the national conversation around reforms needed to revitalize and restore faith in our democracy,” said Rudy Mehrbani, whose Fellowship will focus on reform proposals to improve the ways executive branch agencies deliver programs and services to the American people. In particular, his work will consider how the people in government—and the rules governing their appointment and service—can act as a bulwark against abuse; and ways to expand agencies’ recruiting potential and make them a more welcoming and empowering place for people of diverse backgrounds, including the next generation of public servants.

Fellow programming will begin in the coming weeks, beginning with an introductory event, “Meet The 2022 CEG Senior Practitioner Fellows,” on Wednesday, March 30th at 5:00 pm CT. The event will be livestreamed at bit.ly/CEG-Meet-the-Fellows.

Additional information on the Senior Practitioner Fellowship program, complete biographies of the 2022 Fellows, and  can be found at bit.ly/CEG-Senior-Practitioner-Fellows.

Related
Research
Events
In The MediaJan 26, 2023