A clam shell may be a familiar find on the beach, but its intricate curves and markings tell a rich tale. For centuries, biologists have collected, drawn, measured and compared the shells of bivalve species, pursuing knowledge about how the environment and behavior shape biodiversity. Now, University of Chicago scientists funded by a Center for Data and Computing Data Science Discovery seed grant are combining high-resolution 3D imaging with new geometric deep learning approaches to reveal a fuller version of the story hidden in shells.

David Jablonski, the William R. Kenan, Jr., Distinguished Service Professor in UChicago Department of Geophysical Sciences, has studied evolution and extinction dynamics in marine life for nearly four decades. But over the last two years, his research group has moved into the third dimension, using a campus micro-CT scanner to create 3D images of more than 3,000 shells from clams, oysters, mussels, and other members of the bivalve class collected by scientists and museums around the world. 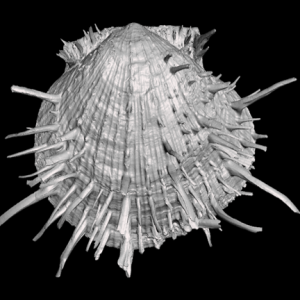 “The challenge to all this is how to capture those morphologies quantitatively in a way that lets us say something concrete about the distribution of form in time and space,” Jablonski said. “As you can imagine, it’s really hard to compare these three-dimensional shells to one another in any rigorous way.”

This growing database will allow scientists to ask deeper questions about biodiversity both between and within species, and how climate change might affect the survival, distribution, and shape of organisms with ecological, economic and dietary importance. But fully realizing the potential of the new data will require novel and advanced techniques for measuring, analyzing, and comparing shell features.

That need led to a partnership with Tingran Gao, William H. Kruskal Instructor in the UChicago Department of Statistics. Gao’s research work focuses on learning and understanding the geometry and topology of high-dimensional data sets, especially those arising from social and natural sciences. Recently, Gao has developed geometric learning frameworks to analyze 3D scans of complex biological surfaces such as primate bones and teeth. The shell database provided a unique opportunity to adapt and expand that line of work in a new biological context, as well as to push the boundaries of geometric deep learning and develop new methods for tackling emerging computational and statistical challenges.

Deep learning, the machine learning approach that utilizes algorithms known as neural networks, provides several advantages in addressing these challenges. As demonstrated by recent advances in computer vision, deep learning excels at making sense of high-dimensional data and sophisticated structures. Instead of the traditional practice of choosing physical characteristics of the shells to measure and compare, deep learning can mathematically extract the most relevant features that distill rich information about morphological differences and, more broadly, the nature of biodiversity.

“These shells have many geometric features that don’t exist in primate shape data, which tend to be more smooth and relatively easier to handle,” Gao said. “Shells, unlike bones or teeth, are not covered by soft tissue; instead, they are directly exposed to external environments and thus encode more ecological information. Their curved external surfaces are often covered with characteristic geometric patterns and textures, which are central objects of study in applied and computational harmonic analysis.”

The ideal end result will be a trained model that allows researchers to interrogate the unseen mechanisms driving biodiversity, trace the path of evolution through reanalyzing fossil specimens, and make predictions about the future of bivalve species, Jablonski said. For example, scientists can study the biological trade-offs bivalves make between investing in a tougher, more elaborate shell or growing the soft tissue within, and how that balance is affected by different environments or modes of life. 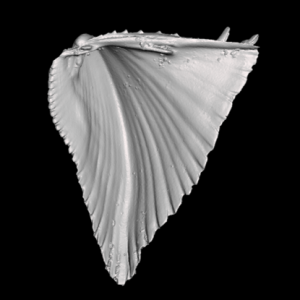 Image and mesh data from the project, collected and analysed in collaboration with postdoctoral researchers Katie Collins and Stewart Edie, will be shared through open resources such as the digital repository MorphoSource, and the deep learning and morphometrics communities will benefit from new approaches that bridge these shape disparities with geospatial information, Gao said. Beyond bivalves, these approaches have the potential to extract new knowledge from species across the Tree of Life, and bring fresh scientific value to specimens archived in museums.

“What we want to do is ask questions about how those knobs are twiddled by the organisms as they confront different climate zones or predation intensities or, for that matter, how that varies among lineages that are economically important versus lineages that aren’t,” Jablonski said. “The association between the surface textures and the ecology has never been accessible, because no one has ever really been able to quantify in a rigorous, reproducible way the huge variety of surface structures that there are.”

“Who would’ve dreamed when some of this stuff was collected in the 19th century what it would be used for?,” Jablonski said. “Technology is always creating new ways to learn new things about museum collections that go back centuries. That’s one of the joys of being involved with this kind of work, diving into those biological archives to weave together species, ecology, and form.”