Kristian Lum, a renowned statistician and machine learning researcher who focuses on fairness, accountability and transparency, has joined the Data Science Institute as a research associate professor.

Lum’s career to date spans work at Twitter, the Human Rights Data Analysis Group, the University of Pennsylvania, and Virginia Tech. She is a founding member of the Executive Committee of the ACM conference on Fairness, Accountability, and Transparency (FAccT) — the premier venue for work on the societal impacts of algorithmic systems — and was named an Emerging Leader in Statistics by the Committee of Presidents of Statistical Societies and a Kavli Fellow by the National Academy of Sciences. 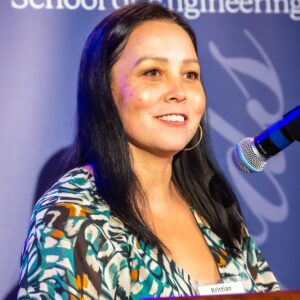 Her research includes the development of new statistical methods and open source software packages for fairness, record linkage, and population estimation. She has assessed models used for predictive policing and risk assessment, finding that such software often reinforces or amplifies racial bias in law enforcement and incarceration, and worked with advocacy and legal groups around their usage.

Lum’s pivot into social impact work began with an impromptu email during graduate school to Human Rights Data Analysis Group (HRDAG) director Patrick Ball, offering to help with their work on estimating casualties during civil conflicts and humanitarian crises around the world.

“I wanted to do something with more connection to the real world, because a lot of my research in graduate school was very methodological, but really driven by applications,” Lum said. “I started thinking about how I could have more of an impact in the world, and I was really drawn to HRDAG, because they’re using advanced statistical methods while also partnering closely with groups on the ground who are documenting human rights abuses and the people who are actually impacted.”

But it was when Lum returned to HRDAG to lead their criminal justice efforts that she found her passion for technically scrutinizing the algorithms increasingly used to make decisions with major human consequences. Her work found that commercial software models to “predict crime” and target police activity carry over the biases of the data they are trained on, leading to feedback loops of disproportionate policing in historically over-policed communities. That work, as well as studies of the risk assessment tools used in setting bail for people charged with crimes, led her to partner with judicial districts and public defender organizations in New York and Philadelphia.

“I think often the role I play is sort of a translator,” Lum said. “I work closely with the advocacy organizations and people who are concerned about the impacts of algorithms and new technologies, but my training was in statistics and I’ve worked in tech. This helps me to translate the more qualitative concerns into the language of statistical modeling and ML. I try to straddle that line of being critical, but also trying to figure out concrete ways to make improvements and mitigate harms, even when the proposed solutions do not address every concern fully.”

This work also led Lum to help launch the first FAccT conference, a unique academic meeting that convened computer and data scientists interested in the ethics of machine learning with journalists, advocates, and people from – and affected by – the justice system. In one session, Lum organized a conversation with a person who was detained pretrial based on algorithmic risk assessment, creating a platform to tell their story to a room full of machine learning experts used to working with abstracted data.

“I do see that as one of the big impacts I had, because I think it changed in some ways how that community of people thought about working in that area,” Lum said.

Lum next focused her attention on the arena of social media, joining Twitter as part of their ML Ethics, Transparency and Accountability Team. While there, she led the development of new equality measures that checked whether changes to the company’s content algorithms suppressed the voices of less popular accounts.

After a change in management at the company, she seized the opportunity to return to academia and join the rapidly growing data science community at UChicago. With the Data Science Institute, she will contribute to the Data & Democracy Initiative, collaborate with faculty peers studying machine learning ethics and transparency, and contribute to programs that use data science for positive social impact.

“I’m really excited to be here,” Lum said. “The people here are fantastic, every single person. Everyone is so inspiring, and I hope to learn a lot.”