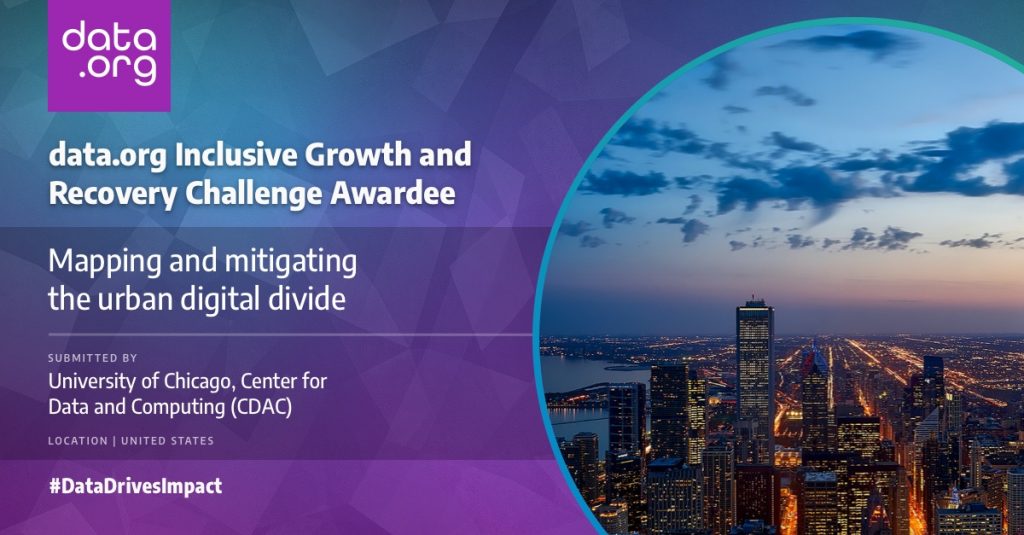 The COVID-19 pandemic has illuminated many societal inequities in the United States. Among them is the “digital divide” — the lack of access to reliable and affordable high-speed internet in many urban and rural areas, both across the United States and globally. As public health measures forced many people to work from home or attend remote school, the critical importance of internet connectivity became evident, as reflected in stories of children doing schoolwork in parked cars in search of wireless internet.

In a new project funded by a $1.2 million grant from data.org, University of Chicago Computer Science Professor Nick Feamster will lead a team of UChicago researchers pinpointing gaps in digital infrastructure, from the lack of cable or fiber connectivity to a spotty video streaming session. The effort will also build a toolkit to help civic organizations — cities, government agencies, community-based organizations and others — make informed decisions about improvements to effectively narrow the digital divide.

The project will start with focused efforts in several Chicago communities, creating a framework and template that can eventually be scaled across the entire city and replicated in other cities and communities.

“Closing the digital divide is the ‘moonshot’ challenge for our generation,” said Feamster, Neubauer Professor of Computer Science and faculty director of the Center for Data and Computing. “It is a grand-scale challenge that will require not only technical expertise, but also an integrative approach to both scholarship and societal impact. No single discipline or single group can solve this problem, but by working across disciplines — bridging our understanding of the technical, social, economic, cultural, and policy realms — I believe we can tackle this challenge.”

The team received the grant as part of the data.org Inclusive Growth and Recovery Challenge, a funding program with the mission of using data science to advance shared prosperity and help ensure an inclusive recovery from the COVID-19 pandemic. Based at the Center for Data and Computing, the intellectual hub and incubator for data science and artificial intelligence research at the University of Chicago, the team will partner with the Mansueto Institute for Urban Innovation, Chicago Public Schools (CPS), civic non-profit organization Kids First, and urban solutions accelerator City Tech Collaborative. 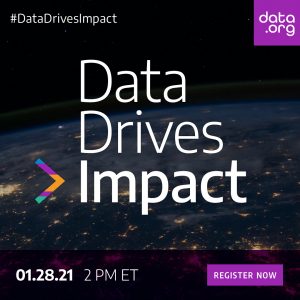 “This project will foster inclusive growth, recovery, and resilience by ensuring that digital connectivity resources and the opportunities they provide are available to everyone; particularly underserved communities, where the lack of digital connectivity further amplifies many existing inequities,” Feamster said. “An important step will be to make sure we really understand the nature of the problem.”

A Need for Speed…and So Much More

The “digital divide” is as old as the internet itself, and there have been many attempts to bridge it. But, as with many problems, good solutions need to be informed by data that is not only accurate but also holistic — reflecting gaps in everything from the lack of physical infrastructure to policy or cultural barriers that prevent uptake, even when connectivity is nominally available.

Feamster’s work on these problems dates back a decade, when he helped the Federal Communications Commission (FCC) design the tests and analysis for the first of its annual Measuring Broadband America reports in 2010.

And yet, despite more than a decade of attention to this problem, the challenges persist. One of the biggest problems, as acknowledged by technologists and policymakers alike, is bad data. For example, the FCC broadband map, the most commonly-used resource, only reports access at the census block level, overestimating the number of homes with high speed internet.

Additionally, some popular internet speed tests were designed for earlier, bygone eras when access speeds were much slower, before modern technologies such as video streaming or conferencing and households with many connected devices. Download speed is also no longer the only metric that matters. Current datasets lack important factors such as the cost or subscription rate of area internet service, its performance when multiple devices are online simultaneously, and the quality of experience while using apps such as YouTube or Zoom.

Many of these tests are also deployed by biased population samples. Recent research from Feamster’s group found that sample bias from client-testing tools skews towards wealthier neighborhoods, with underserved neighborhoods often contributing the least amount of data about internet speeds.

“A speed test needs to measure more metrics than simply just downstream throughput,” Feamster said. “We really need to start taking a much more holistic view into network performance. The challenge is how to represent that information both concisely and intuitively for consumers, regulators, Internet service providers and really anyone who wants to know if the Internet is performing in a way that provides a good quality of experience for its users.”

A Scale-Up Toolkit for Closing the Divide

The data.org project takes a new approach to this problem, recognizing that solving this problem requires a combination of technical, policy, social, and economic data about the nature of gaps in internet connectivity. Gathering this data will first require “starting small” in individual communities and refining the empirical methods, analysis, inference, and decision-making tools for stakeholders before attempting to scale them broadly.

The project will combine cutting-edge data science and machine learning tools — including many developed by Feamster’s own research group — with new measurement approaches and data sources from internet service providers, government agencies, and technology companies. The interdisciplinary research team will collect new, fine-grained data on internet access and performance in thousands of Chicago households, the physical infrastructure of internet service to those neighborhoods, and human factors such as affordability, digital skills, and usage for education, employment, or other services.

After gathering the data, the project will share it publicly and build public maps and dashboards that make the findings accessible to both technical and non-technical audiences. The measurement and visualization tools developed for the project will also be released as an open-source toolkit for other communities and their stakeholders to replicate in assessing their own local digital access.

“Our goal is to try to crack this nut in our own backyard first,” Feamster said. “And then, the true challenge from a data science perspective will be to see if and how we can scale and replicate this across the city and country.”

In Chicago, the project team will work with the UChicago Office of Civic Engagement and outside partners to rapidly put the data into action. Kids First Chicago, the manager of the CPS Chicago Connected program to distribute high-speed internet hotspots to students lacking access, will help the team make connections with community-based organizations and stakeholders. City Tech Collaborative will further expand participation, recruiting households with CPS students for the study.

By focusing on public school students first, the researchers hope to have an immediate impact on reducing disparities in internet access and education, be it for remote learning during the ongoing pandemic or the “homework gap” that exists even when in-person schooling is available. To do so will require a multi-faceted approach combining data and computer science innovation with experts on education, policy, and community outreach.

“I think this project is a great testament to UChicago’s cross-disciplinary culture, and what the Center for Data and Computing and interdisciplinary data science research at the University can come up with when we put our minds together,” Feamster said. “In this sense, the challenge is well-suited for data science, itself a discipline that naturally brings people together across a wide range of domains.”